Our surgeons are often sought after by the press and media for their expert comment. When there was a report of a celebrity and ex-patient Lateysha Grace having had botched Brazilian Butt-lift surgery in Miami, Cosmetic Surgery Partners were the first to know. Miles had famously operated on Lateysha, the self-proclaimed ‘Beyonce of the Valleys,’ a surgery result which both surgeon and patient were very happy with. Proving that each patient needs a unique approach, Miles had not only given Lateysha Breast Augmentation surgery (breast implants), he also skilfully combined the surgery with a Mastopexy (breast uplift) and nipple reduction as well. Lateysha was thrilled with the results, so what happened next was a bit of shock to us!

Unfortunately Lateysha had disobeyed one of the golden rules we advise all patients considering cosmetic surgery. Research! Learn about the procedure itself as well as the doctor or surgeon who will be undertaking the procedure.

There has already been a shocking number of high-profile fatalities as a result of malpractice botched ops performed by untrained practitioners, the Brazilian Butt Lift is no exception. While it is true that the cost of having the procedure performed in the UK or indeed London is substantially higher than going abroad for cheap surgery, we highly advise patients against it. For anyone considering this right now we suggest you watch this video or read this article!

The Brazilian butt-lift aka bum implants, a celebrity fuelled procedure

There’s no denying it, the Brazilian butt-lift is a recent high-exposure cosmetic surgery procedure fueled by the celebrity hype that popularizes it. As this is a relatively new offering on the body enhancement market, it’s normal that not every cosmetic surgery clinic offers it. Those that do can command a high price, and those that cannot afford will seek out the shady. There is no doubt that looking at statistics, cosmetic surgery is in somewhat of a boom, and it’s not even a luxury! It would seem that even the lower socio-economic groups will do anything to have cosmetic procedures performed even if it means saving for years or taking out high interest loans to cover the costs! 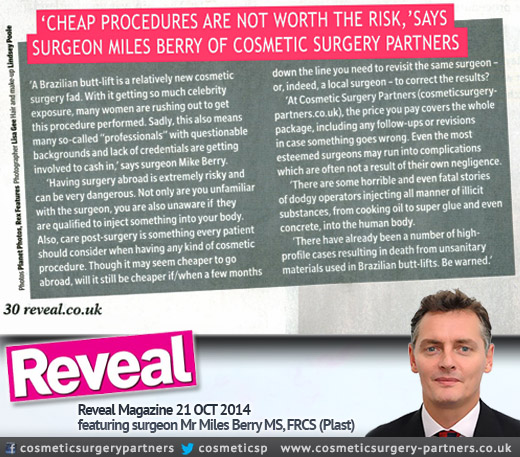 The below is a transcript from the printed Reveal magazine featuring Miles and Lateysha, published 21st October 2014.

‘A Brazilian butt-lift is a relatively new cosmetic surgery fad. With it getting so much celebrity exposure, many women are rushing out to get this procedure performed. Sadly, this also means many so-called “professionals” with questionable backgrounds and lack of credentials are getting involved to cash in,’ says surgeon Mike Berry.

‘Having surgery abroad is extremely risky and can be very dangerous. Not only are you unfamiliar with the surgeon, you are also unaware if they are qualified to inject something into your body. Also, care post-surgery is something every patient should consider when having any kind of cosmetic procedure. Though it may seem cheaper to go abroad, will it still be cheaper if/when a few months down the line you need to revisit the same surgeon or, indeed, a local surgeon – to correct the results?’

‘At Cosmetic Surgery Partners, the price you pay covers the whole package, including any follow-ups or revisions in case something goes wrong. Even the most esteemed surgeons may run into complications which are often not a result of their own negligence.

‘There are some horrible and even fatal stories of dodgy operators injecting all manner of illicit substances, from cooking oil to super glue and even concrete, into the human body. ‘There have already been a number of high-profile cases resulting in death from unsanitary materials used in Brazilian butt-lifts. Be warned.’ 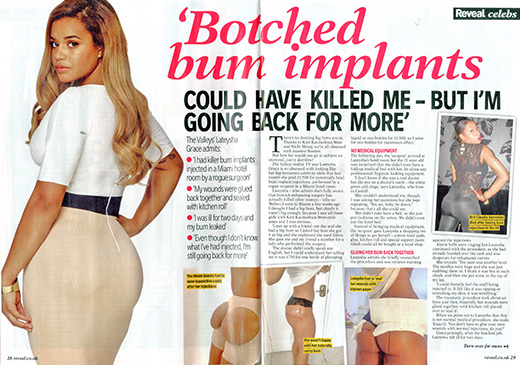 – ‘I had killer bum implants injected in a Miami hotel room by a rogue surgeon’
– ‘My wounds were glued back together and sealed with kitchen roll’
– ‘I was ill for two days and my bum leaked’
– ‘Even though I don’t know what I’ve had injected, I’m still going back for more’

There’s no denying big butts are in. Thanks to Kim Kardashian West and Nicki Minaj, we’re all obsessed with massive booties. But how far would you go to achieve an on-trend, curvy derriere? The Valleys reality TV star Lateysha Grace is so obsessed with looking like her big-bottomed celebrity idols that last month she paid £1,500 for potentially fatal bum implant injections, performed by a rogue surgeon in a Miami hotel room. Lateysha — who admits she’s fully aware that buttock-enhancing surgery has actually killed other women — tells us: ‘Before I went to Miami a few weeks ago I thought I had a big bum, but clearly it wasn’t big enough, because I saw all these girls with Kim Kardashian West-style asses and I was envious. ‘I met up with a friend one day and she had a big bum so I asked her how she got it so big and she explained she used fillers. She gave me and my friend a number for a lady who performed the surgery. ‘The doctor didn’t really speak any English, but I could understand her telling me it was £750 for one bottle of plumping liquid or two bottles for £1,500, so I went for two bottles for maximum effect.’

The following day, the ‘surgeon’ arrived at Lateysha’s hotel room but the 21-year-old was surprised that she didn’t even have a fold-up medical bed with her, let alone any professional, hygienic looking equipment. ‘I don’t know if she was a real doctor but she put on a doctor’s outfit — the white gown and clogs,’ says Lateysha, who lives in Cardiff. ‘She couldn’t understand me, though. I was asking her questions but she kept repeating, “No, no, baby, lie down,” because that’s all she could say. ‘She didn’t even have a bed, so she just put cushions on the settee. We didn’t even use the hotel bed.’ Instead of bringing medical equipment, the ‘surgeon’ gave Lateysha a shopping list of things to get herself — cotton wool pads, glue, kitchen roll and special support pants which could all be bought at a local shop.

GLUING HER BUM BACK TOGETHER

Lateysha admits she briefly researched the procedure and saw reviews warning against the injections. Alarm bells were ringing but Lateysha continued with the procedure, as she had already handed over the cash and was desperate for voluptuous curves. She reveals: ‘The pain was another level. The needles were huge and she was just stabbing them in. I think it was five in each cheek, and then she put some in the top of my leg. ‘I could literally feel the stuff being injected in. It felt like it was ripping or stretching my skin, it was terrifying.’ The traumatic procedure took about an hour and then, bizarrely, her wounds were glued together, with kitchen roll placed over to ‘seal it’. When we point out to Lateysha that this is not normal medical procedure, she nods: ‘Exactly. You don’t have to glue your own wounds with normal injections, do you?’ Unsurprisingly, after the botched job, Lateysha felt ill for two days.

‘I was really weak and I felt sick. I told my boyfriend, who was back home in London, and he told me it was likely to be a reaction. Whatever was put in my body -and I admit I don’t really know what was in the injections – just made me feel really sick.’ 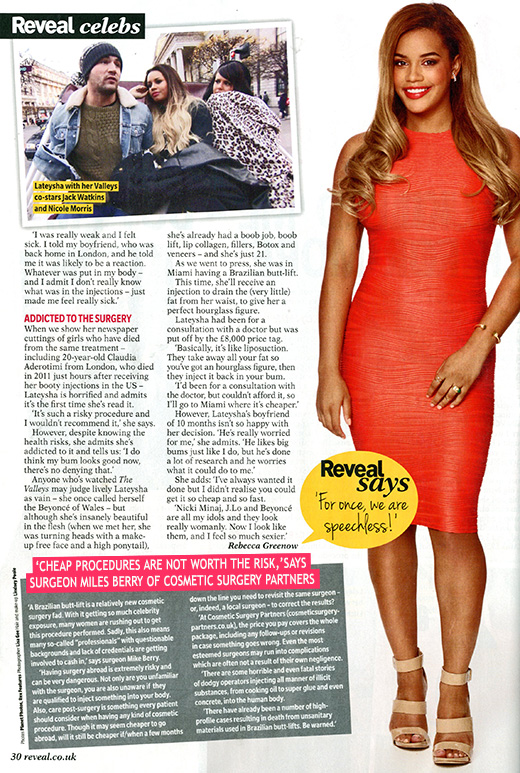 ADDICTED TO THE SURGERY

When we show her newspaper cuttings of girls who have died from the same treatment -including 20-year-old Claudia Aderotimi from London, who died in 2011 just hours after receiving her booty injections in the US -Lateysha is horrified and admits it’s the first time she’s read it.

‘It’s such a risky procedure and I wouldn’t recommend it,’ she says. However, despite knowing the health risks, she admits she’s addicted to it and tells us: ‘I do think my bum looks good now, there’s no denying that.’ Anyone who’s watched The Valleys may judge lively Lateysha as vain – she once called herself the Beyonce of Wales – but although she’s insanely beautiful in the flesh (when we met her, she was turning heads with a make-up free face and a high ponytail), she’s already had a boob job, boob lift, lip collagen, fillers, Botox and veneers – and she’s just 21. As we went to press, she was in Miami having a Brazilian butt-lift. This time, she’ll receive an injection to drain the (very little) fat from her waist, to give her a perfect hourglass figure. Lateysha had been for a consultation with a doctor but was put off by the £8,000 price tag. ‘Basically, it’s like liposuction. They take away all your fat so you’ve got an hourglass figure, then they inject it back in your bum. ‘I’d been for a consultation with the doctor, but couldn’t afford it, so I’ll go to Miami where it’s cheaper.’ However, Lateysha’s boyfriend of 10 months isn’t so happy with her decision. ‘He’s really worried for me,’ she admits. ‘He likes big bums just like I do, but he’s done a lot of research and he worries what it could do to me.’ She adds: ‘I’ve always wanted it done but I didn’t realise you could get it so cheap and so fast. ‘Nicki Minaj, J.Lo and Beyonce are all my idols and they look really womanly. Now I look like them, and I feel so much sexier.

To read the online article at reveal magazine click this link