The latest issue of Now Magazine talks about the dangers of traveling abroad in order to get cosmetic surgery at a discounted price. According to Now, there has been a 109 per cent increase in Britons going under the knife overseas in the past two years. The cheap flights and surgery prices attract people who are looking to have cosmetic surgery at a lower cost than the UK. Although there is a large price difference between having cosmetic surgery abroad and in the UK – you get what you pay for, and also put your life and health at risk.

30 year old Claire Hawker’s story is an example of how having cheap cosmetic surgery abroad can put your life in danger. In 2009, Claire traveled to Prague to have breast surgery because it was a third of the cost of having it done in the UK. Claire took out a loan of £2,300 which covered the cost of the surgery as well the flights to Prague. When Claire got there, she was unable to discuss the operation with the surgeon due to his lack of English, and therefore had to show photographs of the breasts she wanted. She later found out the surgeon who performed her breast surgery was only a trainee. Although Claire was experiencing a lot of pain, she was discharged the next day and flew back home. A week after her breast surgery, Claire noticed her breast was leaking smelly, brown pus from an open wound, and could see the implant sticking out after she had removed the bandages.

After going to hospital, Claire was told the implants she had were actually illegal and too big for her. The infection in her breasts was also putting her life at risk, so she had to have the implants removed. It took a year of hospital treatment to remove the infection, and she was left with small breasts and awful scarring.

Last year Claire appeared on Botched Up Bodies, a TV show that helps victims of botched surgery. Our expert surgeon Nick Percival gave Claire her confidence back by correcting her botched surgery and giving her new implants.

If you have been affected by botched breast surgery we at Cosmetic Surgery Partners can help! We have performed hundreds of successful breast implant exchange surgeries, correcting the mistakes of others. Unfortunately as long as patients keep travelling to cheap locations abroad we will have to carry on performing revision surgeries. 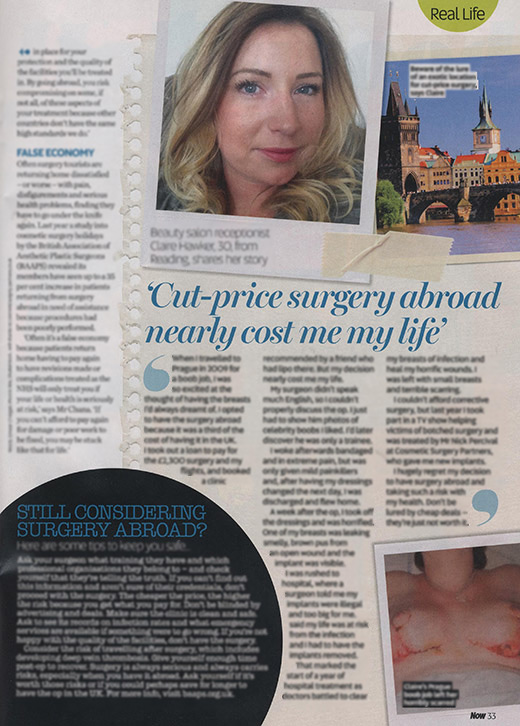