It’s not the first time that surgeon Miles Berry and scripted reality TV super star Chloe Sims crossed paths. Chloe Sims had her breast augmentation surgery performed by Cosmetic Surgery Partners surgeon Miles Berry. After receiving great advice and an even better result from Miles with her breast implants, it seemed like the best option to see him again for what began a series of many cosmetic surgery procedures…

Television personality and glamour model Chloe Sims not only wanted to make her boobs look bigger, but also her bum too! She is quoted saying “I must have the flattest arse in Essex”. Chloe first realized her so called flaw at 18 years of age after trying on a boob tube dress, which left her feeling insecure and boyish after being surrounded by girls with hourglass figures. Chloe took yet another visit to Cosmetic Surgery Partners to discuss with our surgeon Miles Berry the possibility of having bum implants, which would enhance her bum whilst giving it a natural look.

The consultation video clip featured in The Only Way is Essex is the actual consultation Chloe had with Miles at the Cosmetic Surgery Partners London clinic. As with every cosmetic surgery consultation, Miles explained the procedure with Chloe, whilst also mentioning that there would be no sitting down for two weeks after surgery. Chloe responded with quite a humorous reaction, and looked perplexed as to what people do when they can’t sit down for that amount of time! In order to get bum implants, or in scientific terms Gluteal implants (also known as ‘buttock implants’), implants or liquid-based fillers will be injected into the bum, costing around £5,000 a pair. It seems as though buttock implants are becoming popular in the celebrity world, and stars such as Heidi Montag, Kim Kardashian and Nicki Minaj have undergone the procedure. We suspect many more celebrities have had the procedure but with most of them being close lipped about the operation we can only speculate.

This once faddish celebrity cosmetic surgery trend is one that has now been accepted into the mainstream and is gaining momentum amongst the average Jane. One newspaper goes so far as to claim that Kim Kardashian alone has sparked a 484% rise in the number of buttock implant procedures performed in the past 2 years! So there you have it, you can squat till you are red in the face or you can do like Chloe Sims has done and take a short cut.

Buttock implants are also known as Glutteal implants but more commonly reffered to as bum implants and the Brazilian butt lift procedure (BBL) – If you are interested to contact surgeon Mr Miles Berry for a consultation or for more information about the procedure please get in touch with us on our contact page. 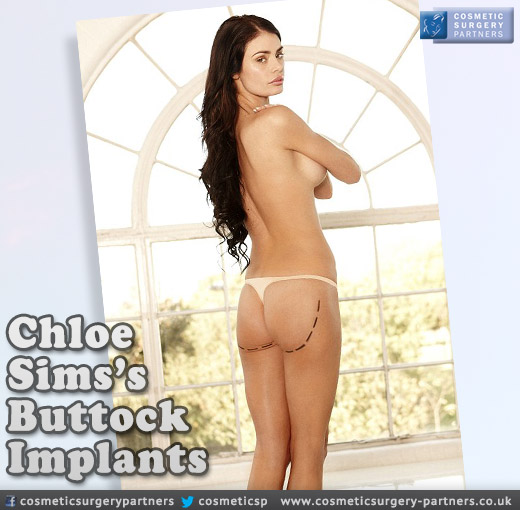 We have constructed patient guidance. It has been based on best-practice guidelines from a variety of professional bodies and serves as a step-by-step pathway with your safety as our prime concern.

Any cookies that may not be particularly necessary for the website to function and is used specifically to collect user personal data via analytics, ads, other embedded contents are termed as non-necessary cookies. It is mandatory to procure user consent prior to running these cookies on your website.